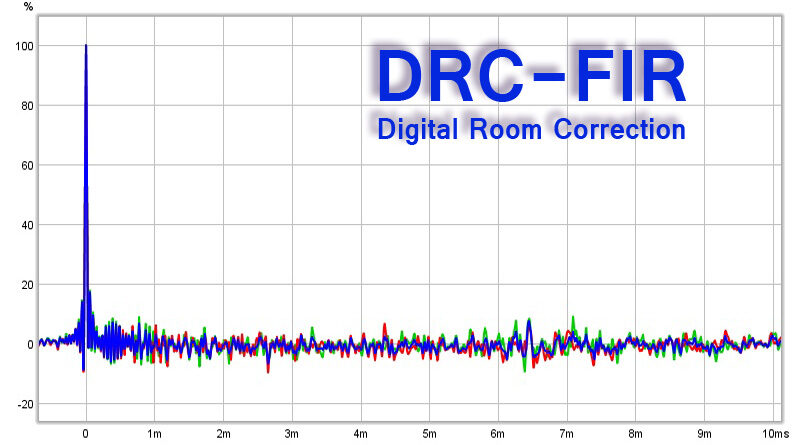 To equalize my arrays I’ve made use of the free software package DRC-FIR written by Denis Sbragion.

To learn this software I’ve used it experimentally for a period of about half a year, trying to find the boundaries of what I could and what I couldn’t hear. I experimented with the many variables, by looking at what they do and how I perceived those changes. Instead of using it for room correction (which the name implies) I was mostly interested in what it could do for speaker correction, or rather: correcting the first wave front that hits our ears.

Some of that wave front will be direct sound, some of it (mainly the lower notes) will be largely influenced by the room, due to their specific wave lengths. With arrays, we can diminish the effects that the floor and ceiling have  on the sound as perceived by the listener. Not really valid for the whole frequency curve with these 3.5″ drivers, but true for the most important part of music: the entire midrange. At least, that’s what I regard as the most important part of music, as most of what we perceive around us is midrange sounds. We are less critical of the top and bottom end, as part of our survival instinct. That does not mean to say we should neglect the upper and lower parts, but with a speaker like this specific array, it compromises the top and bottom reproduction somewhat to really shine at mid frequencies.