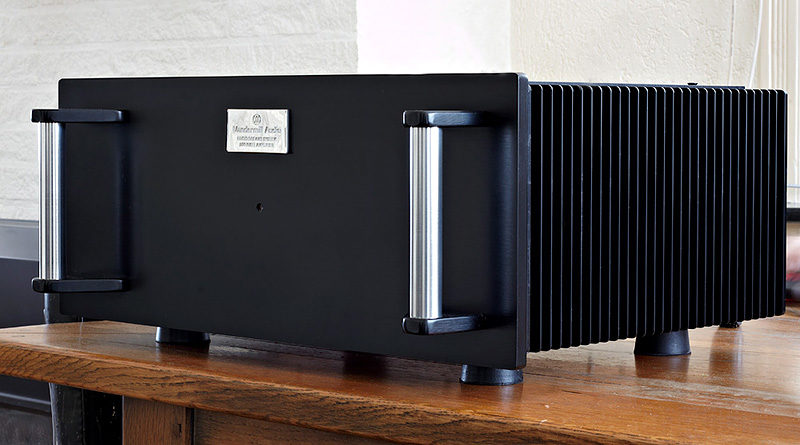 Our get together with the listening session, listening to several amplifiers within my system, changed my world. Never again will I say: all good amplifiers sound alike. Now I know I do have a preference.

One of the amplifiers stayed at my house after our session. Over time I managed to persuade the owner/builder of the amp to sell it to me. The amp in question is a DIY effort to match a Goldmund Telos 400 amplifier. Goldmund is a Swiss mark, active in the upper High End of HiFi equipment. I had only come across them in online magazine articles prior to this encounter.

This amp was created by it’s original owner as part of a private research into amplifier topologies. He has made several amplifiers for his own benefit to be able to test and judge them and be able to pick his favorite flavour. In no way does he (nor I) publicly sell any of his amplifiers as they were build for his own private use. It was build as a DIY experiment, one that I was able to acquire as a deal among friends. Neither him or me are in the business to make copies of named designs for a profit. We are Do It Yourself people with a more than average interest in the technical part of this hobby. My use of the Goldmund name stems from a technical interest in this brand’s design ideas. I do not claim to have similar performance as the original.

Here’s what a real Goldmund Telos 400 looks like on the inside:

Those Swiss guys sure build some crazy amplifiers. I can’t say I love their outer design choices, but on the inside it’s build to reach a goal. Goldmund believes that phase linearity is very important to our listening pleasure, one of the key ingredients that makes everything sound more real. That’s not a strange line of thought to me, however it is something that has been debated at length without a real definitive answer. Personally I do like that point of view.

To reach that goal they build (powerful) amplifiers that start at DC and reach up to 2.5 MHz. Very fast and agile, much like a racing car. They’ve spend years, decades even, perfecting their vision.

All I can say is that this result, the one pictured on the top of this page, really impressed me. Not in one part, like the bass performance, but overall it sure was something else. No other amp we tried had that much power and control at the bottom end. However the top end remained detailed and sweet too. Midrange is very engaging and really does sound life like. Together with the arrays it had a synergy, they just worked real well together.

So what does my Reference amp look like on the inside? 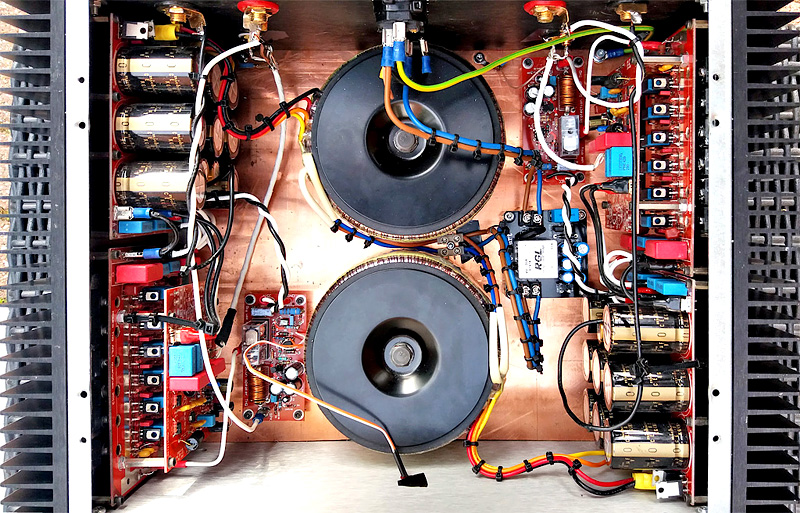 It doesn’t have everything on the inside that the real deal has, it features no build in DAC and the elaborate power supply, consisting of many smaller toroid transformers, isn’t there either. But if you look closely, you’ll see it does have a lot of similarities with the amplifier pictured above it. It is build up as a dual mono amplifier in one chassis. It sports 12 mosfets per channel, just like the real deal, and the PCB’s are based on the research done on a genuine Goldmund Telos 400. Build up with as many of the same parts as the original as possible to be able to get as close as possible to that Goldmund sound. Be aware though, there are many ‘claimed’ or so called ‘Goldmund copies’ out there, not all of them are build up to the same level of quality and detail. I feel very fortunate to have had a chance to listen to an amplifier like this, within my own setup at home. I feel even more fortunate to be able to say I own this version of it.

The Goldmund Telos 400 specs as featured in an older sales brochure: