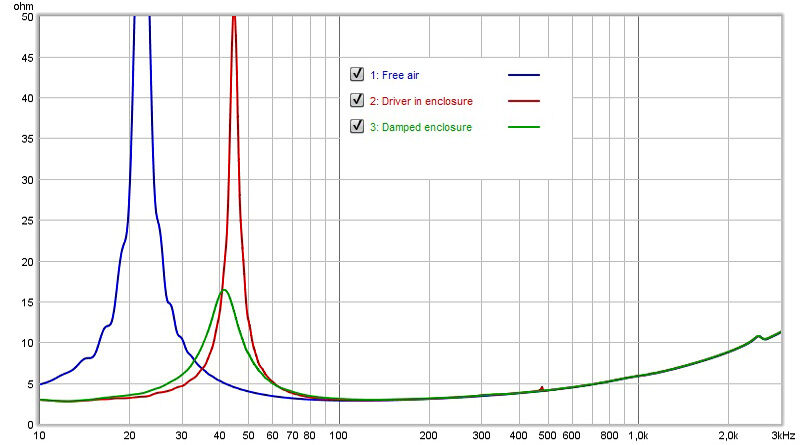 First things first. With a subwoofer, we want to make sure the enclosure is quiet, does not make sound by itself. We have the moving part of the sub, that’s making the noise. The static part should stay static. For this reason I like to build up a bit of weight in the enclosure. By adding Mass Loaded Vinyl on all walls I block the internal sound from going out, it also adds mass/weight. I added 3mm MLV to the sides and 5mm to top and bottom, making each enclosure wall about an inch in thickness.

As the internal volume has been reduced by adding the amplifier enclosure, I wanted to make sure I could make up for that by damping the inside with fiberglass insulation, the fluffy kind. I also use real wool felt as this combination has been proven to work well. This way the wool felt can form a barrier to prevent glass fibers to reach the woofer motor.

To reach this goal I build a wool felt cage around the driver using tyraps and staples to fix the wool felt:

Fill the void with fiberglass insulation, with the wool felt layer protecting the driver:

Close it off with a layer of felt and slide it into the center-body. First half of the enclosure is stuffed:

This may seem extreme, but the plot above shows the result. Impedance peak is back at 41.5 Hz (Driver has not been broken in yet, so I expect it to get below 40 Hz after a good ~80 hour run-in). Each layer I’ve added had a positive effect, I tested (closing up the subwoofer for each test) until I could not make any more progress (moving down the impedance peak and/or getting a smoother impedance curve).

The graphs of both woofers ended up being pretty close after both receiving the damping treatment. The curves are smooth with little to none resonances up to the driver’s impedance wiggle at 2.5 KHz. You can see the enclosure related wiggle at ~475 Hz that is gone in the fully stuffed graphs.