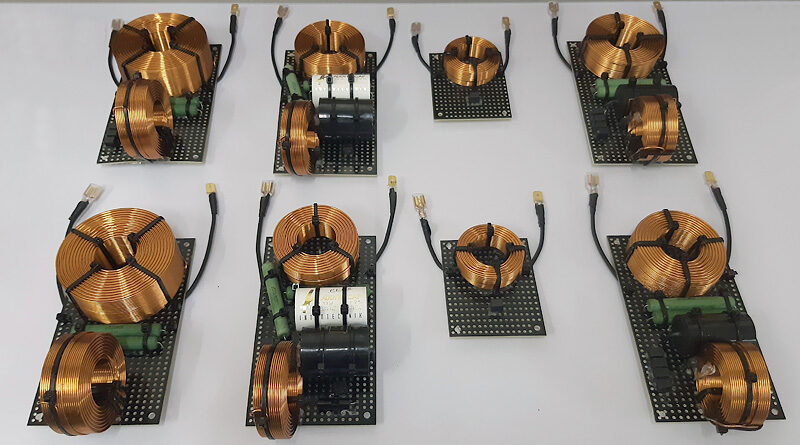 Over the course of the last year I have added passive filtering to the array. It’s prime function is to make the assay act like an expanding array at ever lower frequencies. Meaning that the number of drivers that contribute at higher frequencies is lower than the number of drivers that play with bass notes. Sounds complicated? Well, partly it is. Shaded arrays are nothing new. The shading usually is done by making the outer drivers play lower in volume. With some impedance tricks, varying the number of series drivers in a parallel group one can make the outer drivers play at lower volume.

But that’s not what I wanted to achieve. As the unfiltered arrays are fun because they play with high dynamics, I did not want to loose that part. With a bit of inspiration from fellow DIY project guys over at DIYaudio.com, I started to use VituixCAD to find out just how I could create a filtering scheme that would allow me to have all drivers play full volume at bass frequencies while gradually less of them help out the higher one moves up in frequency. Now why would it be needed? Arrays that consist of a row of separate drivers will suffer from comb filtering. By limiting the number of drivers that contributes to the high end, we limit that comb effect to a much higher frequency.

The bottom end is still done by all drivers at full strength, meaning we won’t be suffering from dynamic problems due to having a small amount of drivers work much harder. All drivers share the load equally at bass frequencies.

So how is this accomplished? By filtering the parallel groups of drivers with the passive filters displayed at the top of the page here. All in all it allows us to control vertical directivity of the array. Here’s a picture to compare it to a non shaded array:

The bundle that looks like one vertical beam from +15 degree to -15 degree is the shaded array. As can be seen it has a more even bundle of energy and no longer shows those white looking spots at the top, the peaks of energy due to comb filtering. Instead it is way more even and around the designed listening height it’s showing quite exemplary behavior. It still shows some lobing, more on that later….

So how does it look compared to a single driver?

The single driver would have the following vertical pattern, again the same 3.5″ driver is used: 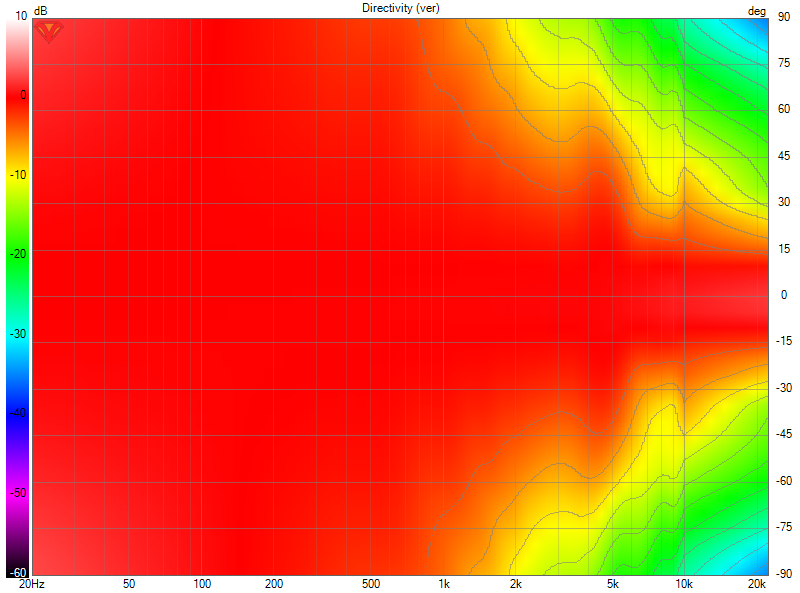 (this is a single driver’s vertical directivity plotted in VituixCAD)
Vertical control down to about… ~7 KHz, but in a very limited way.

Compared to the frequency shaded array of 25 drivers: Vertical beam width control down to about 200 Hz! How is that happening? With all those drivers? It is because all those drivers that it has the limited beam-width vertically. Like a big 15″ driver starts to beam way earlier than a 3.5″ driver would. We have created a row of drivers that makes up an energy source that’s very small horizontally, but very tall vertically!

Are there any drawbacks? Sure, you see those horn shaped curves in the plot? They are the “dreaded” side lobes of an array consisting of multiple drivers. That is because it isn’t a continuous array, but rather a series of 3.5″ drivers. Use a smaller driver and those “horn like” lobes would go up in frequency.
One drawback of doing just that, smaller drivers wouldn’t be able to play the bottom end, so you’d need a support system down low.

But look at how much energy is hitting the floor and ceiling with that single driver. Depending on the room the ceiling reflection will be at about ~41 degree to 57 degree with the Array, and at about ~51 degree in the single driver case. (in my specific room with a 3 meter high ceiling and at my listening distance)
That means the single full range driver would see strong reflections from ~6 KHz on down, while the array would have (a few of) them around 5 KHz – 8 KHz and not much more.

Let’s see that as an in-room prediction:

Not really intuitive or predictable at first but the true reason why Array’s make sense in a living room.