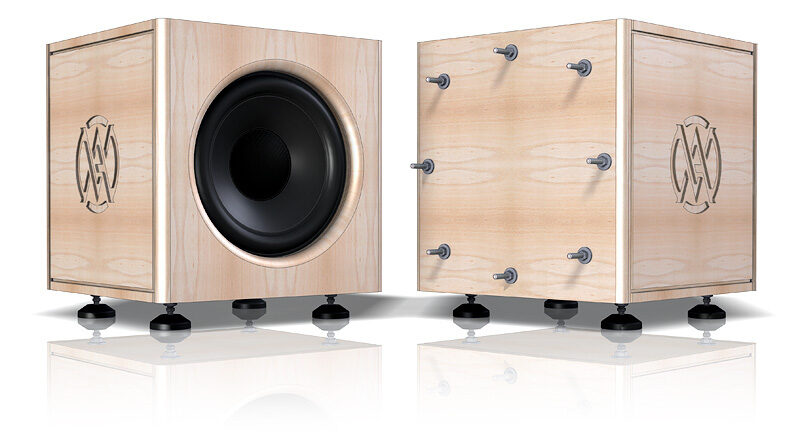 Even though the outer dimensions were pretty much fixed at 40 x 40 x 40 cm, I wanted to create an enclosure that had a store bought appeal to it. When I say designing, I do mean the visual aspects. As the outside dimensions are fixed, there’s not much left to play with, except working on the looks…

I had already simmed the Scan Speak 30W woofer in a volume that big (subtracting the woofer volume and thickness of the enclosure walls and braces) to get a general feel of what it could do as a sealed subwoofer. I aimed for a net 40L enclosure volume, placing the impedance peak in box to about 41.5 Hz. Together with room gain from it’s position and ‘Linkwitz Transform like’ EQ this should be able to add the bottom end I was looking for.

To make it visually pleasing I decided to hide the bolts from view, back mounting the driver behind the baffle and finding a way to be able to fasten that baffle. In my array I had already played with threaded rods. I figured if I made a double baffle assembly, one that holds the Scan Speak 30W woofer, and another, thicker outer baffle that hides all the hardware and keeps it all together. Some specifically placed cuts and fillets were added to make it more fancy looking. Give it a more of a ‘designer look’ than just being a blunt square box. It had to fit right in with the arrays. Still a form follows function design, but we can try to make it pretty, right?

I also wanted to have my logo featuring on the sides. For my amplifier I had made a ‘Vandermill Audio’ logo that would look nice as a decal. I had that logo laser cut out of 3 mm thickness birch ply, so I could glue it on top of the side walls of my enclosure. Here’s the result:

As far as structural rigidity goes, I only opted to divide the side panels with a single brace. The front and back consist of multiple panels and most forces are pressurising these top and side panels. This brace will push any resonance way up, out of the bandwidth these subwoofers will play. One could even “tune” the enclosure with the threaded rods.