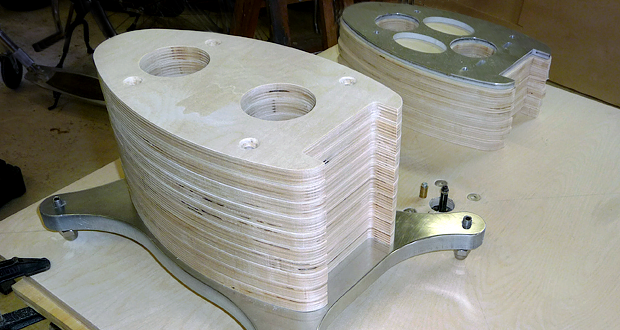 With the final shape determined and the design ready I had to look for a way to actually make it. I had given it some thought and water-jet cutting seemed like a possible way of making the shapes for the stack.

But I couldn’t help but think water and wood isn’t that good of a combination. I’m sure it could work but it worried me. Due to various reasons I finally decided to do the work with a router, mounted in a table. I had some templates made out of 8 mm thick aluminum and also the base or foot out of a thicker piece of aluminum.

For the material I decided upon Baltic birch. It has an excellent reputation in speaker construction and for me it has several advantages compared to MDF. With a stack this big, the total array measuring about 2.25 meter, excluding the base, it has to be a good sturdy material. Here’s a picture of a bigger stack, showing the templates and base on the router table

Prior to routing the shapes were cut with a jig-saw. One of those pieces can be seen beneath the template with the holes. That way the router bit doesn’t have to do too much work and stays fresh longer. To get an idea of what we are talking about here’s a picture of the stack about 3/4 during the routing stage of the first enclosure: One can imagine you’d have to be a little crazy to take on a build like this.

Don’t ever underestimate building an array like this. It really is a lot of work. Planning all the different stages helps but you still got to pre-cut all of those pieces and finish them with the router. It took about 5 router bits alone. Don’t just try this with a cheap Router. I actually did that and with my production it lasted for a week’s work before the bearings were shut.

Let’s have a look at that interior shape, a close up of one of the chambers:

Another benefit from the wavy shaped interior is the varying wall thickness of the enclosure. It is no longer a straight flat surface. The wall thickness varies from 18 mm minimum to about 30 mm.