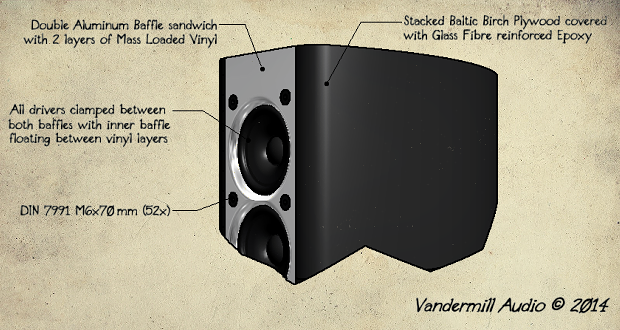 Line arrays, consisting of full range drivers, were the only speakers I could find that ticked all those boxes. They even added some of their own features to that list. Due to being a line source they only drop 3 dB for each doubling of distances compared to 6 dB for more traditional point source speakers. If you choose a line array that covers most of the distance from floor to ceiling you also have the advantage of less problems with reflections from the floor and ceiling. The reflections from the floor and ceiling virtually add to the length of the array, making it seem even taller than it is.

The lower frequencies also need help from equalizing. Due to the small size of the used drivers, 3.5″ tall, they will roll off a lot earlier than you want them to. But because there are 25 of them you have enough potential to equalize that low end. The total surface area of the 25 drivers exceeds the area of a 15″ woofer.

So, time to fire up my favorite 3D design program to get a feel for what I could create. There were some basic ideas in my head that I wanted to incorporate. I had seen translam constructions that appealed to me. A stacked construction that would enable me to create a round outer shape to counter diffraction and a irregular shape on the inside to combat the back wave from the speakers. No parallel walls anywhere, all small details to help get better sound potential. Here’s the shape I ended up with after some earlier tries that didn’t quite seem right to me. You can see the rounded outside, almost an ellipse shape and the inner irregular shaped chamber.

Another benefit from the wavy shaped interior is the varying wall thickness of the enclosure. It is no longer a straight flat surface. The wall thickness varies from 18 mm minimum to about 30 mm.