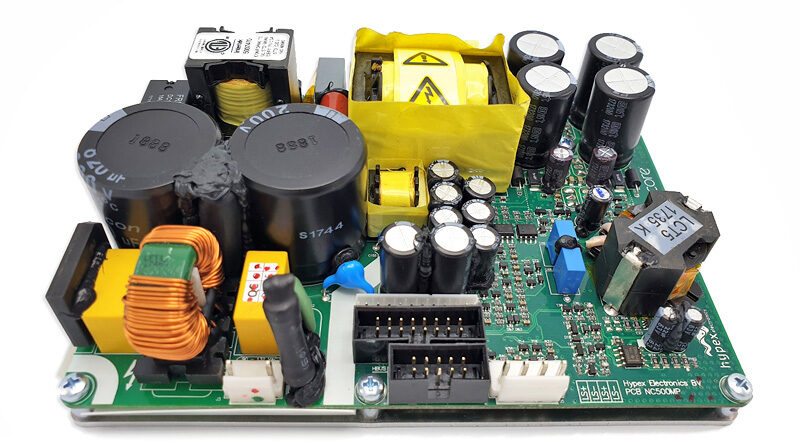 To power the subwoofers I used the Hypex NC500MP module. It is a nice, compact and efficient 500 watt into 4 ohm class D module, more than enough power to feed the Scan Speak 30W/4558T00 woofer.

This is the same power module as used in the Hypex FusionAmp FA501, which is meant as a plate amp to power active subwoofers. As I have my own chain of DSP, I did not want that extra AD/DA step of the FusionAmp. I was able to get my hands on a pair of these NC500MP modules, not easy as they are sold as OEM only.

I have integrated the amplifier module into the sub enclosure. First by cutting a hole into the back panel to fit the NC500MP trough.

Getting a fitting heatsink to mount the amplifier on took a bit of a search. I found a suitable fit in the Fischer Elektronik SK 47 (0.53 K/W (l x b x h) 150 x 200 x 40 mm). Fin orientation is less than ideal like this, but it’s cooling properties are still way more than a FusionAmp has. These amplifiers don’t need much cooling surface, often only the enclosure or back plate is used, but I wanted to make sure I had plenty of cooling surface for heat dissipation.

The heatsink got 5mm stand-offs to allow air flow. Easily done by using a 5mm gasket made from a piece of mass loaded vinyl on each side. Leaving it open on the top and bottom allows some airflow behind the heat sink.

And finally, I sourced an aluminium enclosure to guard the amplifier from the inside. I found a perfect match in the Hammond Electronics 1550G (222 x 146 x 55 mm). This saved some inner volume compared to making a separate plywood construction to house the module.

The lid of the Hammond enclosure is unused, the case bolts to the back panel with it’s original screws (sunk into back panel) to function as a cover for the NC500MP amplifier module.

The same amplifier enclosure, now covered in 5mm thickness mass loaded vinyl to dampen/isolate it. A set of Monacor ST-922G speaker connects to wire the subwoofer. Add a power inlet plug with fuse, an RCA plug and an on/off switch to the outside and the conversion to active subwoofer is complete.